Home » News » Piece of My Heart

Piece of My Heart

Janis Joplin’s iconic song “Piece of My Heart” was never intended to be about literally stopping a beating heart. Rather, it was about a heart breaking due to unrequited love.

But in the world of abortion-on-demand, where preborn babies are fair game, the stakes are a bit different. The results have little to do with love of the vulnerable but rather self-love.

These days, “the medical field largely treats abortion as a specialty, not an essential part of a doctor’s toolkit.”  But for younger medical students, things are a bit different. There seems to be a greater commitment to providing patients with the full array of services. Dr. Jewel Brown, for example, is a third-year medical student in Florida in the field of obstetrics and gynecology. Her goal is “to be the kind of doctor a patient can trust with anything, whether it’s a prenatal checkup, a C-section—or an abortion.”

And there it is. For some, there is no perceived difference between medical services for women and abortion when it comes to “reproductive health”—the current code words that include abortion as nothing more than part of the full range of services every woman should have at her disposal. 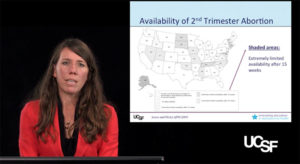 At the Women’s Options Center at the University of California San Francisco, for example, abortion is the main focus. Several investigative reports into this particular entity have given us a bird’s-eye view into the dark world where abortion becomes a marketing opportunity as well as an alleged reproductive service. While UCSF’s Jennifer Kerns has said that the abortionist who performs a dilation and extraction abortion suffers an emotional burden from performing the killing, she neglects to note that the burden of death is actually imposed on the preborn child. Clearly building up a callous disregard for the human person requires time.

While we have no sympathy for these practitioners, we can learn that, even as they allegedly become emotionally disturbed, they train others on how to treat aborted baby body parts as nothing more than products. This paves the way for the marketing of baby body parts—a practice that continues to be rampant even after the Center for Medical Progress exposed the practice and provided undeniable proof that Planned Parenthood and others were profiting. Though these videos prompted congressional inquiries, the sordid practice has continued.

For decades, UCSF has been involved in fetal tissue research. Several high-visibility experiments, with study protocols exploiting aborted fetuses at a range of gestational ages and hundreds of animal test subjects, have been published online.

The Division of Experimental Medicine is known to have received fetal organs from UCSF’s own abortion centers as well as California-based Advanced Bioscience Resources—Planned Parenthood’s partner and the #1 baby body parts distributor in America.

The journey from treating abortion as a medical specialty to capitalizing on the bodies of abortion victims is not a stretch but a short walk down a very repulsive path. The 1973 Supreme Court started escalating the war against the preborn, and over the past 47 years we have seen that war grow more barbarous as consciences numb.

Doctor Jewel Brown, Professor Jennifer Kerns, and the folks at UCSF—including Women’s Options Center—all have one thing in common: They have freely chosen to break the hearts of preborn babies by killing them. The research on and sale of their body parts became a grisly practice that was not a bridge too far.

The lesson here is a simple one: Killing people by calling them something other than people does not change the horror of it. Abortion numbs consciences and stops beating hearts. As a nation, we have collectively murdered millions.

The result: A piece of our nation’s heart has gone missing. The cure: Those of us who respect life and human dignity stay the course until no little heart or big heart is cut to pieces ever again.