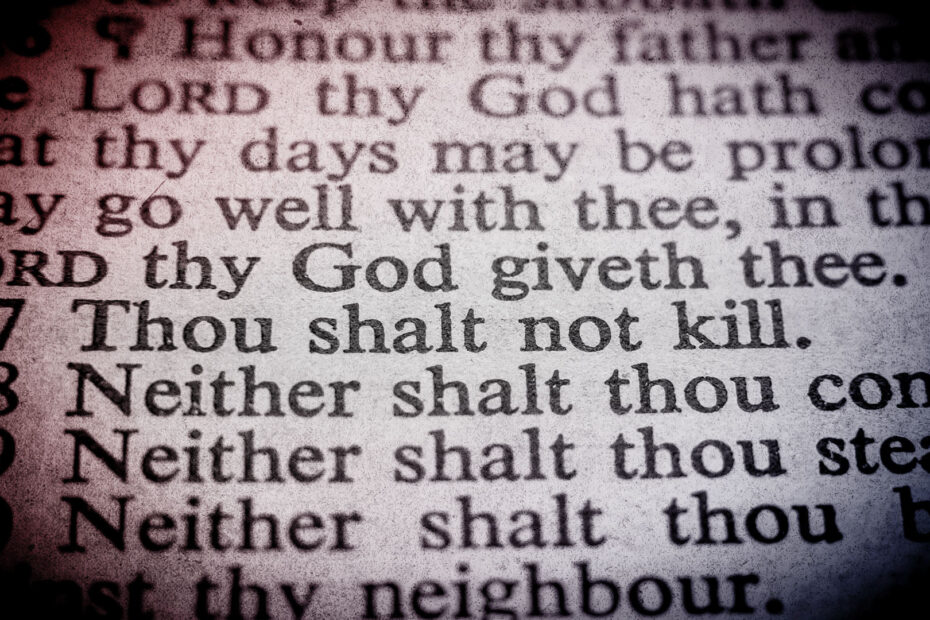 The Catechism of the Catholic Church states: “The ‘divine and natural’ law shows man the way to follow so as to practice the good and attain his end. The natural law states the first and essential precepts which govern the moral life. It hinges upon the desire for God and submission to him, who is the source and judge of all that is good, as well as upon the sense that the other is one’s equal.”

But once the laws of God and nature fall by the wayside, what replaces them beckons and exacts evil even among those one would least expect.

The headline “House Democrats pass phony ‘inflation reduction’ bill that forces Americans to fund abortions” is an example of the arrogance of man. That bill contains tax credits for women who choose to kill their preborn children! This is not only evil but a signal that decaying moral precepts are in full view.

Another example is Montana abortionist Claire Putnam’s claim that because of the local political climate she is shutting down her chemical abortion clinic. Putman’s moral compass appears to be based on the question of whether or not she can openly kill babies for profit. One wonders if, given her profession, her grasp of moral precepts ever existed.

Aging people in America confront the same threats as the preborn child, which is why there is a need for organizations like HALO (the Healthcare Advocacy and Leadership Organization). Ask yourself why America needs a national organization to defend “the lives and safety of persons facing the grave consequences of healthcare rationing and unethical practices, especially those at risk of euthanasia and assisted suicide.”

Clearly the lives of innocent people of every age are at risk in our nation today because the moral precept “thou shalt not kill” has become a decaying relic from a time when human beings revered each other and their lives. At this moment nobody can take that time-honored precept for granted lest their life be at risk or taken because they presumed decency where only deceit and death exist.

In this situation, as in many others during the history of man, we know that where there is evil, good does exist and must be brought to bear. Recall the story of German theologian Dietrich Bonhoeffer. He has been described as a modern martyr who took a stand against the evils being perpetrated by Adolf Hitler and paid with his life. Bonhoeffer was man of principle who preferred God and His commandments to evil and deception.

Bonhoeffer’s example should be a constant reminder to each of us who defend the vulnerable that no matter the price we are called to pay, we cannot abandon the innocent to the wiles and villainous ways of the corrupt.

To put a fine point on the reasons why Bonhoeffer is such a good example of how we should oppose deceit and killing, I defer to Eric Metaxas, a Bonhoeffer biographer who said:

For Bonhoeffer, the term “religion” meant a false substitute for true faith, so “religionless Christianity” meant true Christianity. Bonhoeffer saw that the people in Germany who called themselves Christians were mostly not real Christians. They were just churchgoers, going through the motions. But they weren’t deeply committed disciples of Jesus Christ. So when the evil of the Nazis came, they were utterly unprepared and just floated along with the red-and-black tide.

Bonhoeffer understood the truth about the precepts of almighty God, and he did not manipulate even a word of them. It cost him his life, but he preferred death to deceit.

When we think of his legacy and we consider the examples of those people who parade their devotion to abortion as a religious rite, nothing is left to the imagination. Though the comparison is not a pretty one, we are reminded of these profound words of Archbishop Fulton J. Sheen, who observed many people with decaying precepts in his own day and who said: “In the present instance, it is the spiritual which is being submerged and the material which is in the ascendency.”

Through faith and perseverance, we can strive to rekindle God’s precepts among our fellow men. May the Lord give us the strength and wisdom to do so.