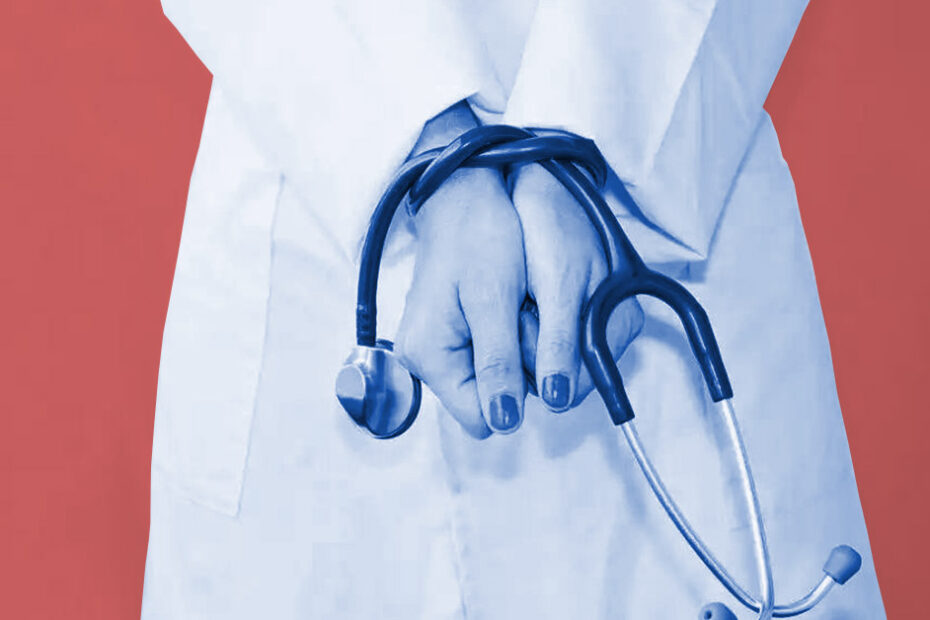 “Wherever you live, whether your state is for now red or blue, there’s another growing obstacle to abortion access and comprehensive gynecological services. It’s the Catholic Church,” according to the online magazine Salon. In the surging public relations campaign against Dobbs v Jackson, a major theme is Catholic doctors’ opposition to abortion.

You have to sympathise with Planned Parenthood, NARAL, the ACLU, the New York Times, and all those bien-pensant flag bearers for oppressed American women. Those damned Catholic doctors are a reactionary obstacle to progress.

Always have been, it seems.

Here’s a bureaucrat complaining about exactly the same thing in 1943: Catholic doctors are standing in the way of a woman’s right to choose an abortion.

The decree on interruptions of pregnancy of female Eastern workers and female Poles has called forth objections on the part of a minority of reactionary Catholic physicians. Even physicians who hold the right political views occasionally voice objections …

The following opinion of a politically sound district physician of Coburg could be construed as reflecting the opinion of many physicians who otherwise hold the right views: “Personally, I must say that I was disappointed by the report that abortions would be permitted on pregnant female Eastern workers. In general, I personally consider it in accord with medical and especially with German ethics that a pregnant woman is inviolable” (Vol IV, p 1082).

This is an excerpt from the proceedings of one of the trials of Nazis after World War II. (They are available on-line in Trials of War Criminals Before the Nurenberg Military Tribunals Under Control Council Law No. 10 in the Library of Congress.)

These dissident doctors weren’t all Catholics, but they were mostly Catholics, according to Nazi correspondence. (A notable exception was a prominent gynaecologist in Bamberg whom the Nazis regarded as troublemaker – but he was a committed Lutheran.)

The Nazis killed around 16 million people, so the lesser crime of forced abortions in the Third Reich has not had the attention it deserves. But it was one of the charges in the indictment of Richard Hildebrandt, who was executed in a Polish prison in 1951. At the end of the War, Hildebrandt was the head of the Race and Settlement Main Office (RuSHA), an SS agency which enforced Germanization by increasing the number of Germans and decreasing the number of Poles and Jews. Abortion, voluntary and involuntary, was one of its methods. The Nazis did not regard abortion as a mark of freedom but of slavery. It was a way of enforcing its racist agenda.

Two issues are worthy of note.

They even took care to insist that the procedure would be painless and easy. In March 1944, a memo went out from another agency of the SS which stated:

“Although pregnancy interruptions ought to be carried out on a voluntary basis only, pressure is to be applied in each of these cases. … A pregnancy interruption should go off without incidents and the Eastern worker or Pole is to be treated generously during this period in order that this may get to be known among them as a simple and pleasant affair” (Vol IV, p 687).

The Allied prosecutors concluded, however, that the women’s consent was fictitious: The tribunal found that “The desired result of this systematic program of abortions was (a) to keep the Eastern laborers available as slave labor; and (b) to hamper and reduce the reproduction of the population of the Eastern nations” (Vol 5, p 112).

Abortion lobby groups always insist that abortion is a deeply personal, voluntary decision. But they would say that, wouldn’t they? Even the Nazis couldn’t admit that they supported forced abortions. Pressure from partners; pressure from stigma; pressure from poverty; pressure from lack of support – these may not force women to have abortions, but they weaken a woman’s consent.

Second, take a look at the “reproductive health” policy that the Germans forced upon the Polish population.

Part of the evidence tendered to the Tribunal was a memo given to the head of the SS, Heinrich Himmler, in November 1939 about how to achieve “a ruthless decimation of the Polish population and, as a matter of course, the expulsion of all Jews and persons of Polish-Jewish mixed blood.” It’s interesting to note that the measures imposed by the Nazis on the Poles are the same ones which have been enthusiastically embraced by American society (and elsewhere in the West):

“All measures serving birth control are to be admitted or to be encouraged. Abortion must not be punishable in the remaining territory. Abortives and contraceptives may be publicly offered for sale in every form without any police measures being taken. Homosexuality is to be declared as not punishable. Institutes and persons who make a business of performing abortions should not be prosecuted by the police” (Vol V, pp 95-96).

In short, the most viciously racist policies that the world has ever seen foreshadow our pro-choice, LGBTQI+ culture and our steeply declining birth rate.

Does this prove that there is a link between the pro-choice movement and the Nazis? No. Not conclusively at any rate – although there comes to mind Marie Stopes, Margaret Sanger’s counterpart in Britain, who sent a volume of her love poetry to “Herr Hitler” four weeks before he invaded Poland. But it ought to make us think.

And who were the doctors willing to resist these atrocities? Those damned Catholics.

Thanks to Richard Doerflinger for leads to the Nuremberg Trials documents.

This article has been reprinted with permission and can be found at mercatornet.com/why-are-catholic-doctors-blocking-reproductive-rights/80870.

By Donald DeMarco, PhD Karl Stern’s The Flight from Woman, published in 1965, is not only a masterpiece of intellectual thought but a reliable roadmap…