Home » News » What Is Freedom?

In the secular world, freedom is defined by Webster as “the quality or state of being free: such as a: the absence of necessity, coercion, or constraint in choice or action” and “b: liberation from slavery or restraint or from the power of another.”

But for Catholics, freedom means something more. According to the Catechism of the Catholic Church, freedom is “the power, rooted in reason and will, to act or not to act, to do this or that, and so to perform deliberate actions on one’s own responsibility. By free will one shapes one’s own life. Human freedom is a force for growth and maturity in truth and goodness; it attains its perfection when directed to God, our beatitude.”

It is through this second lens that we want to examine the meaning of terms such as “freedom of choice” and “freedom to choose death.”

The culture of death views freedom of choice as the ability of an expectant mother to choose life or death for her preborn child. When the pro-abortion zealots promoted the Freedom of Choice Act in Congress, they were striving to make this action—the act of abortion—an enshrined part of our law. In other words, FOCA would have created an absolute right to abortion. Fortunately, the effort failed.

But the desire to instill that right lives on, and in many circles the public is told that abortion is already a constitutional right, even though it’s actually not. 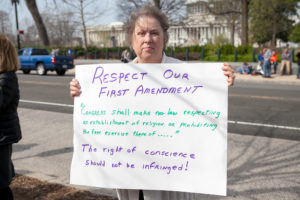 At the other end of life’s spectrum are those who tell us that everyone has the freedom to choose to die when, where, and how he pleases. Proponents of this position include even some teens who support this view. One young person recently wrote: “Overall, euthanasia should be a God-given right to those who need extra help in ending their lives. . . . For the people, euthanasia is a freedom everyone should enjoy.”

Sadly, her opinion is not unique. Books have been written about it, articles have been published, and organizations have been striving to ensure it for years.

In fact, Compassion & Choices, a pro-euthanasia organization, is so committed to the freedom to choose death that it is totally opposed to protection of religious freedom. For this organization, freedom of conscience stops when its perceived freedom to impose death is opposed.

In both cases—abortion and euthanasia—freedom that transitions to direct killing is not true freedom at all. Rather, such acts are heinous to God, no matter what proponents call them.

St. John Paul II taught that the commandments of God “represent the basic condition for love of neighbor; at the same time they are the proof of that love. They are the first necessary step on the journey towards freedom, its starting-point. ‘The beginning of freedom,’ Saint Augustine writes, ‘is to be free from crimes . . . such as murder, adultery, fornication, theft, fraud, sacrilege and so forth. When once one is without these crimes (and every Christian should be without them), one begins to lift up one’s head towards freedom.’”

For us, it is clear that acts of abortion, euthanasia, and their progeny are the antithesis of true freedom. Deadly acts against the preborn child, the aging, the infirm, and other classes of vulnerable people are never representative of freedom. Rather, they reveal the choice to enslave one’s self to evil.

Such acts are self-defeating, not self-sacrificing; they are acts of hate, not love.

When we ask “What is freedom?” we know there is but one answer. True freedom embraces the Truth, the laws of God, and the love of Christ. Anything else is a cheap choice.