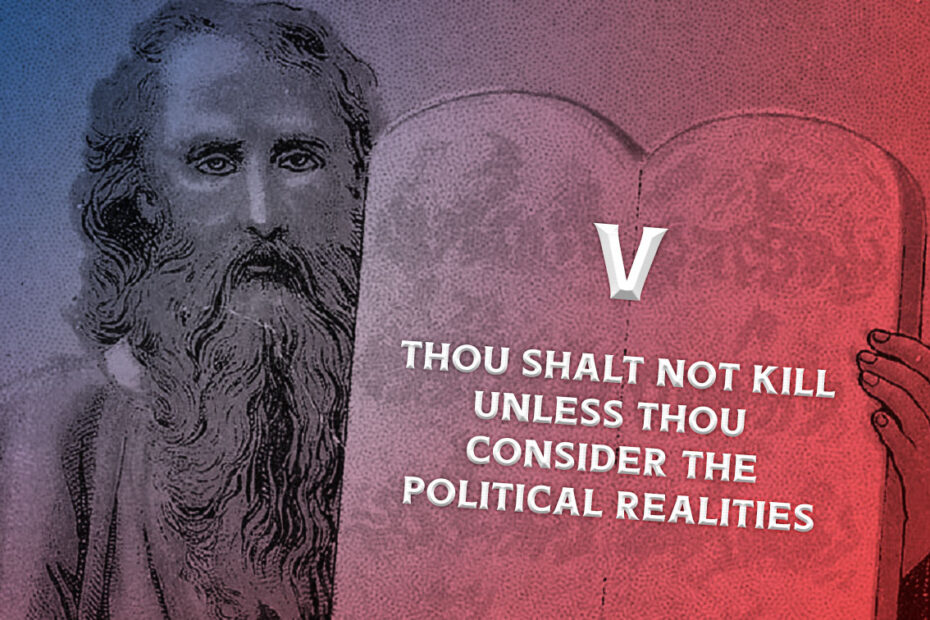 There she goes again! That what some folks say when we get on the topic of why aborting a baby is not a political issue! But the fact is that what people say are political realities are for many of us nothing but polite words for condemning babies to death.

While children at all stages of development ought to enjoy the law’s protections, political realities may make it impossible to achieve this fully and immediately in many jurisdictions. When that is so, enacting the most pro-life law realistically possible is justified. We should not allow the perfect to be the enemy of the good where the perfect is not currently feasible, but a law better than the legal status quo is achievable.

Please note the suggestion that certain situations may “make it impossible” to achieve total protection for every innocent preborn child. I have grown to detest the very idea that politics dictates who lives and who dies, and yet many treat it as a given. But have you ever wondered what God might think?

We are living in a society that has grown callous toward the dignity of the human person, and while it is occurring incrementally, the results are dead human beings. Is anyone thinking about this?

Michael Cook is certainly someone who has given it more than a little consideration. In defense of Catholic doctors who defend life and refuse to accept the status quo, he writes:

Abortion lobby groups always insist that abortion is a deeply personal, voluntary decision. But they would say that, wouldn’t they? Even the Nazis couldn’t admit that they supported forced abortions. Pressure from partners; pressure from stigma; pressure from poverty; pressure from lack of support – these may not force women to have abortions, but they weaken a woman’s consent.

When anyone’s agreement to a certain action is based on coercive tactics, the result is not a reflection of the person’s true convictions, but rather a knee-jerk reaction to the sentiments of others. And when this choice results in the death of an innocent person, who exactly feels the guilt? Do those who pressured the expectant mother ever feel remorse? Silence is the answer, and there is the tell.

Perhaps this is why in the culture today folks tend to rely on crutches such as telemedicine instead of facing the death that results from abortion. One supposes that getting advice to kill a baby by following the recommendations of someone who is remotely calling the shots somehow eases the aftermath of the choice. But does it really?

Is denial a fitting excuse for anyone, including the governor of Georgia—Stacey Abrams—who denies that a preborn child has a heartbeat at six weeks?

Observing the so-called post-Roe nation in which we live explains a whole lot about why the culture of death continues to win regardless of what the Supreme Court does.

As Carolyn Witte, cofounder of the group TIA and provider of telehealth services involving the abortion pill, says: “Post-Roe America demands that we reimagine where and how abortion care is delivered. . . . We must shift from a siloed approach where abortion is treated as a separate issue to a whole women’s health care model.”

And that is already happening. According to a recent report, pharmacists in at least 17 states and the District of Columbia may provide contraceptive care without requiring medical visits, and requirements for pharmacists and patients are set by state policies. If the policy favors death by chemical abortion, then the killing continues.

The pro-baby-killing machine never takes a step back. It simply carves a new way forward, ignoring the principles of respect for the human person and devotion to truth. In this line of work truth took a holiday long ago, and the body count proves it.