The State of Marital Unions 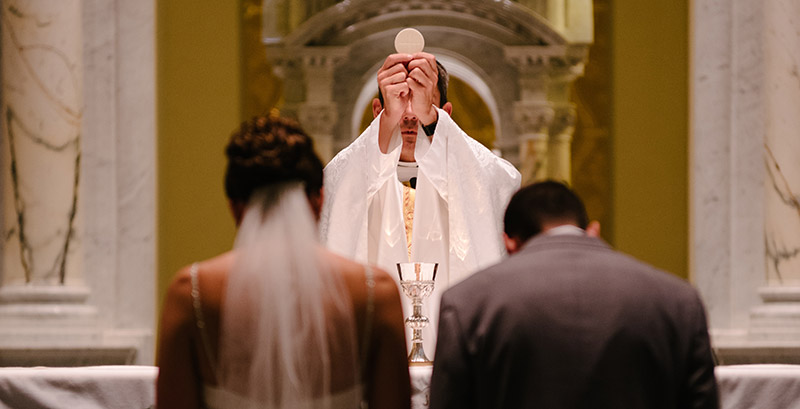 The State of Marital Unions

Matrimony, the marriage of a man and a woman, is the most sacred union in the world. The Catechism of the Catholic Church teaches that “the matrimonial covenant, by which a man and a woman establish between themselves a partnership of the whole of life, is by its nature ordered toward the good of the spouses and the procreation and education of offspring; this covenant between baptized persons has been raised by Christ the Lord to the dignity of a sacrament.”

Indeed, as the foundation and core of the most important union in history, marriage is an awesome blessing for all involved.

Pope Benedict XVI once stated that the family “is fruitful for society because family life is the first and irreplaceable school of social virtues.” But sadly, both marriage and the family are under serious attack in our world today. And, as Pope Francis pointed out, it is the children of broken families who suffer the most because of negative comments and attitudes as parents disparage one another.

This is not a new phenomenon.

The cultural movement to deconstruct the true meaning of the marital union started a long time ago. In 2013, a very astute commentator wrote: “The progressive cultural elite has long perpetuated prejudices against the family that, unchallenged, lead to its ruin. Among several I cite three: (1) the assertion that marriage makes men and women less free; (2) the assumption that children are a burden; and (3) the insistence that sexual differentiation is a fiction. These three ideas represent, as it were, three waves of the anti-family movement of the past 150 years.”

READ >>  Build a Culture of Life in November

Add to these three prejudices the stealth popularity of the pill, which came on the horizon in the early sixties, followed by the decriminalization of abortion in 1973, and we find marriage in grave danger. We need only look at the divorce rates over the past 50 years to make our point. While it might seem that those rates have begun declining, the reason is that more and more modern couples choose to live together and never marry.

Writer Bill Beckman expressed this same reverence to Humanae Vitae and reflected on the tone Pope Paul VI set when he wrote this encyclical in 1968, saying:

The pope presented this teaching in a tone that was at once compassionate and realistic toward couples facing difficulties and pessimistic about the long-term consequences of deliberately separating the unitive and procreative truths of marriage.

His predictions that moral standards would decline, infidelity and illegitimacy would increase, women would be reduced to objects for pleasure, and that governments would grow more coercive in the goals of population control all have proven true. Other damaging consequences can be shown as well.

Indeed, among these consequences is the dire state of marital unions in our nation. At American Life League we are painfully aware of the consequences that befall us when families decay or are never formed in the first place due to the availability of contraception and abortion, and to the disregard for the sanctity of marriage.

Our ALL Culture of Life Studies team has taken this threat very seriously, preparing a unit study for junior high school students entitled Defend Life: Marriage and Family. Program developer Mary Kizior gives us a hint about the lessons, saying: “We understand that not every child has the opportunity to grow up in a loving home with both of their biological parents. But we also understand that God intended marriage to last until one or both spouses dies and to be between one man and one woman. It’s becoming increasingly important to show students the need for strong, healthy marriages and to help them understand why marriage is a sacrament between one man and one woman.”

Posted by Culture of Life Studies Program on Wednesday, April 5, 2017

Confronting a cultural problem like the deconstruction of the meaning of the marital union requires education and sound formation of conscience for people of every age.

With these tools, prayer, courage, and faith we can restore to its rightful condition the state of marital unions.

Photo by Josh Applegate on Unsplash