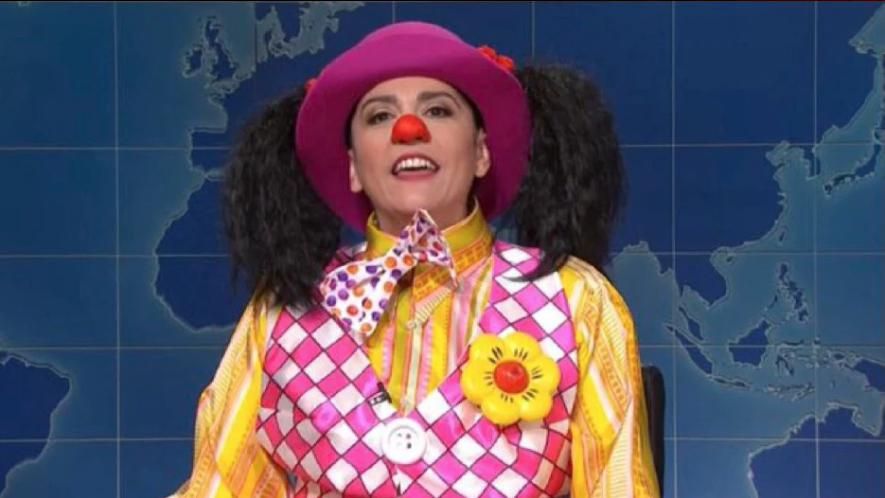 Many people find clowns annoying. Some find them a little creepy or scary. But the clown introduced to us on Saturday Night Live this past weekend was disturbing.

Cecily Strong, a regular SNL cast member, dressed as “Goober the Clown” and sat with “news” host Colin Jost, who had just mentioned the Texas law that bans most abortions after six weeks. He introduced Goober, saying: “Here to cheer us up . . . Goober the clown, who had an abortion when she was 23.”

Then, in a bizarre display, “Goober” joked about her abortion and about abortion in general. Throughout her abortion commentary she squirted Colin with water, asked him to pull her finger, and attempted to make an animal out of a balloon.

This skit—if you can call it that—was painful to watch, but it revealed the sorry state of a country filled with people who have no concept of science or of the beginnings of a human being’s life.

Over the course of this four-minute clip, Goober made comments such as: “People keep bringing it up, so I gotta keep talking about freaking abortion. But it’s a rough subject, so we’re gonna do fun clown stuff to make it more palatable. Whee!”

Abortion is a “rough subject,” but she’s poking fun at it anyway? Maybe she doesn’t want to admit that it’s a rough subject because, in every abortion, a tiny, innocent, and defenseless baby dies.

Goober continued with her bizarre comments:

I wish I didn’t have to do this because the abortion I had at 23 is my personal clown business. But that’s all some people in this country wanna discuss all the time, even though clown abortion was legalized in Clown v. Wade in 1973. . . .

Did you know one in three clowns will have a clown abortion in her lifetime? You don’t cause they don’t tell you. They don’t even know how to talk to other clowns about it, because when they do talk about it, if you were a clown who wasn’t a victim of something sad, like clowncest, they think your clown abortion wasn’t a righteous clown abortion. . . .

In the [abortion center’s] waiting room, they had a little guest book where all the clowns could write their clown abortion story for the next clown to read it so she wouldn’t feel so alone. Awooga!

Then Goober inhaled some helium from a balloon and said in a high-pitched voice:

Here’s my truth. I know I wouldn’t be a clown on TV here today if it weren’t for the abortion I had the day before my 23rd birthday. Clowns have been helping each other and their pregnancies since the caves. It’s gonna happen so it oughta be safe, legal, and accessible. We will not go back to the alley. I mean, the last thing anyone wants is a bunch of dead clowns in a dark alley.

Colin seemed uncomfortable. Some in the audience laughed, but it sounded like uncomfortable laughter. The whole skit was a pathetic display of attempted humor gone very wrong.

And it went wrong because abortion is not funny.

Her downplay of the death of her child—and of the more than 60 million children who have been killed in abortion since Roe v. Wade—elicited several different emotions from those of us who understand that abortion kills a baby every time. But the most salient emotion it elicited was sadness. We are sad because the state of our country right now is abysmal. With women screaming for the “right” to have an abortion, political leaders sending our taxpayer money to abortion-hungry organizations, and clowns—both literally and figuratively—telling women that they have a “right” to abortion, sometimes we see little hope in our efforts to help others understand the sanctity of human beings.

Further, I’m not really sure which emotion words like “personal clown business,” “clown abortion story,” “clowncest,” and “dead clowns in a dark alley” were intended to invoke, but I do know that they strengthen my resolve to educate. And I hope they strengthen yours.

How can we educate?

First, we must teach that abortion hurts women too—both physically and emotionally. Statistics and news stories from Operation Rescue and from abortion healing services prove this.

Second, we must realize that the number of back-alley abortions has always been heavily inflated. Bernard Nathanson, an abortion doctor who later became pro-life, worked as the director of NARAL (the National Abortion and Reproductive Rights Action League—now called NARAL Pro-Choice America) for many years before an ultrasound-guided abortion opened his eyes to the reality that he was killing babies. In a 1979 book, he wrote:

How many deaths were we talking about when abortion was illegal? In NARAL, we generally emphasized the frame of the individual case, not the mass statistics, but when we spoke of the latter it was always 5,000 to 10,000 deaths a year. I confess that I knew that the figures were totally false and I suppose that others did too if they stopped to think of it. But in the “morality” of our revolution, it was a useful figure, widely accepted, so why go out of our way to correct it with honest statistics?

Why indeed? If people are fed a lie often enough, they will believe it.

In 1972, the year before the Supreme Court decriminalized abortion, the CDC reported 39 maternal deaths from illegal abortion. Although any death is a tragedy, 39 is a far cry from thousands.

Third, we must teach that a new baby—with his own DNA—is created the moment the sperm fertilizes the egg. That’s not religion; it’s science!

Many in our country have spent so long hating babies that they fail to see the beauty in them.

It’s time we make our voices heard. Abortion has consequences; it’s not simply a “choice,” and it’s not a “right.”

So, let us take action to teach not only our kids but our friends, our family, and our neighbors that preborn babies are human beings. They are not part of the woman’s body. They are not clumps of cells. They are growing babies waiting to be born, wanting to be cherished, and wishing to be loved.

At the Culture of Life Studies Program, we know you need help teaching this to your kids and building a foundation that helps them understand that we must respect and protect all human beings. That’s why we create age-appropriate lessons that teach the humanity of the preborn baby. Two in particular are of vital importance. For kids in pre-K-2nd grade, we have a lesson called The Developing Baby, which teaches about the wonder of a preborn baby. And for kids in middle school and older, we have a lesson called Defend Life: The Beauty of the Developing Human Being, which gives students the tools they need to defend preborn babies and to speak up when others advocate for abortion. When children understand the wonder and beauty of babies, they will feel more confident in their ability to defend them.

So let us pray for the misguided clowns of the world. Let us pray for all those who think abortion is funny. And let us pray that we can effect change in a world so determined to keep the killing of babies a “right.”