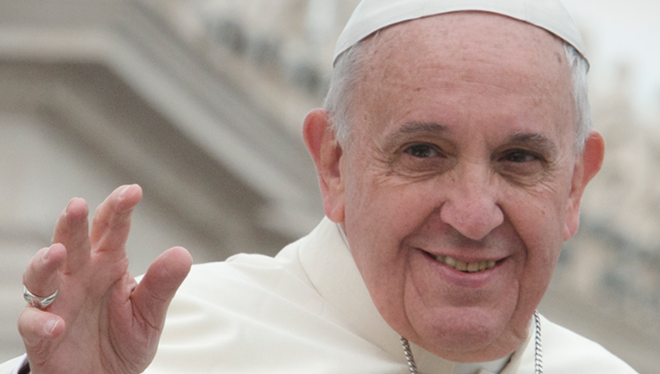 As we have recently begun the Year of Mercy and draw nearer to the birth of Christ, we wanted to reprint a beautiful commentary from September. Let us all remember that to be merciful is to be Christlike.

Earlier this year, His Holiness Pope Francis officially announced a very special jubilee year which he called the Extraordinary Jubilee of Mercy. He designated the dates December 8, 2015, through November 20, 2016, as this year.

At the time of this announcement, Pope Francis said, “To be touched with tenderness by His hand and shaped by His grace allows us, therefore, to approach the priest without fear for our sins, but with the certainty of being welcomed by him in the name of God, and understood notwithstanding our miseries. Coming out of the confessional, we will feel God’s strength, which restores life and returns the enthusiasm of faith.”

In a further message regarding this Year of Mercy, on September 1 Pope Francis issued a letter in which he restated the words of Saint John Paul II by saying this about those who procure abortion: “I have met so many women who bear in their heart the scar of this agonizing and painful decision. What has happened is profoundly unjust; yet only understanding the truth of it can enable one not to lose hope. The forgiveness of God cannot be denied to one who has repented, especially when that person approaches the sacrament of Confession with a sincere heart in order to obtain reconciliation with the Father.”

Twenty-one years ago, in The Gospel of Life, Saint John Paul II embraced in words the mother who had aborted her child, saying, “The Father of mercies is ready to give you His forgiveness and His peace in the Sacrament of Reconciliation. To the same Father and His mercy you can with sure hope entrust your child.”

READ >>  Coaching Us on Respect for Life and Truth

It is important to point out the significance of St. John Paul II’s words as well as those of Pope Francis. For the Catholic mother who has procured an abortion and knows that she has been automatically excommunicated from the Church, these are among the most profoundly merciful words she could ever hear. And for those Catholics who were not aware of this law and yet have been troubled by the pain, agony, and sorrow of committing abortion against their own flesh—their own baby—these words should bring a sense of gratitude.

In either case, this invitation to experience the mercy of God should be welcome salve for the souls of these mothers.

Each of us should remember and know with certainty that, for God, in His divine mercy and love for every human being, there is no sin so grievous that it cannot be forgiven. This is particularly important to recall in an era when big abortion makes money on the body parts of aborted children while deceiving the mothers of those children into believing that abortion serves a higher purpose.

How heartless are such suggestions; how evil those who would render such deceits to an unsuspecting expectant mother who is already filled with fear and loneliness. Predators who market aborting children know this all too well and pounce on their prey with bloodlust in their eyes.

It is because of this that we are so very grateful to Pope Francis for embracing, as Saint John Paul II did before him, the mother of the aborted baby with words of comfort, solace, and merciful love.