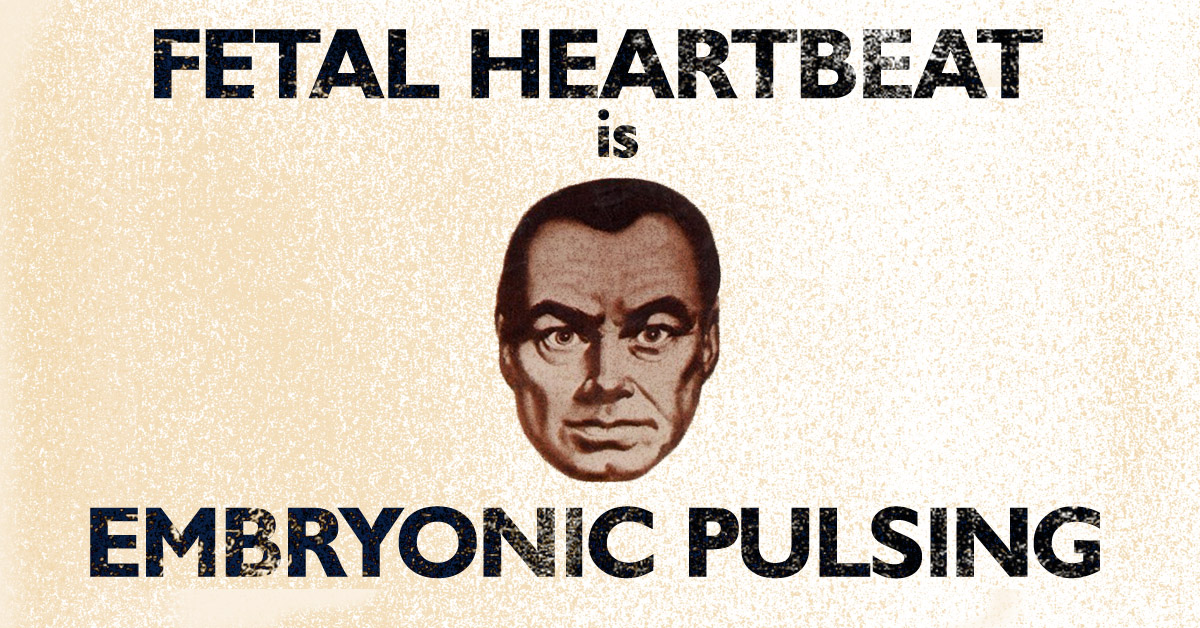 In our present age, there is clearly a disconnect between reality and the deadly fiction of modernity. It is a manifestation of the immense fear the enemies of truth have for the very existence of what is right and good, namely God and His creation.

One of the best examples of this is the new “woke” terminology. Note that the word woke means nothing all, but is a slang term invented by those who view themselves as culturally hip and clever. This new language is promoted on social media and elsewhere by progressives like Catalina magazine editor Cathy Areu—a pundit with a platform.

Yet, it is taking hold. Not a day goes by without the introduction of a new word or phrase designed to alter cultural attitudes toward human beings. We call it spinning the words so that bad becomes good and the good goes away.

When Professor Mike Most wrote his “Reproductive Rights Glossary for the Unwoke,” he echoed our concerns, sharing new definitions for words like abortion and fetal heartbeat. For example, abortion is now “acceptable violence” resulting from the “unacceptable violence” the preborn child does to his mother, the “gestator.”

If this sounds like something out of George Orwell’s 1984, then there is still hope for you.

But words, like ideas, have consequences. In our woke world, women must be powerful but at the same time unfruitful. Why this is so should be obvious. As our culture swings toward Gomorrah,

“Satan knows, just as he did when he targeted Eve, that if he gets the woman, he gets everyone. And if he can destroy women’s source of fruitfulness, then he has succeeded, because our greatest gift isn’t in power; it is in being fruitful.”

Precisely! Once women become enslaved to contraception and abortion, anything is possible. And the younger the brainwashing begins, the more successful it will be.

The results are manifest everywhere. In California, for example, sex education for students in grades kindergarten through twelve has been mandated. And in many cases this is done without parental consent! Planned Parenthood has been on the forefront of this project from the beginning, and as you can imagine, classrooms are fertile ground for sowing the seeds of the death peddlers’ new woke language—including “gestator” and “embryonic pulsing.”

Dehumanization becomes number one on the curriculum as citizens apathetically turn the other way. In the wake of woke, the National Education Association has adopted a new “business item” declaring its support for “the fundamental right to abortion under Roe v. Wade.” And since the NEA is the most powerful teachers union in our country, let the parent beware.

Teachers focused on sex, child-killing, and contraception are probably not doing the best job teaching reading, writing, arithmetic, and geography. Why bother when the goal is creating woke robots?

In the midst of this cultural confusion, it is clear that we need to focus on the values that never change. For as St. John Paul II taught, the eternal truth about men and women never changes, because

“every individual is made in the image of God, insofar as he or she is a rational and free creature capable of knowing God and loving him.”

No matter what the woke crowd tells our children, or us for that matter, this truth does not change.

“A lie consists in speaking a falsehood with the intention of deceiving. . . . To lie is to speak or act against the truth in order to lead someone into error. . . . The gravity of a lie is measured against the nature of the truth it deforms, the circumstances, the intentions of the one who lies, and the harm suffered by its victims.”

And in this case the harm leads to the loss of souls and the lives of the innocent.

Now is the time to remind our fellow Americans of this truth and of the consequences that will result from ignoring it or denying it, no matter what the modern-day spin doctors preach.