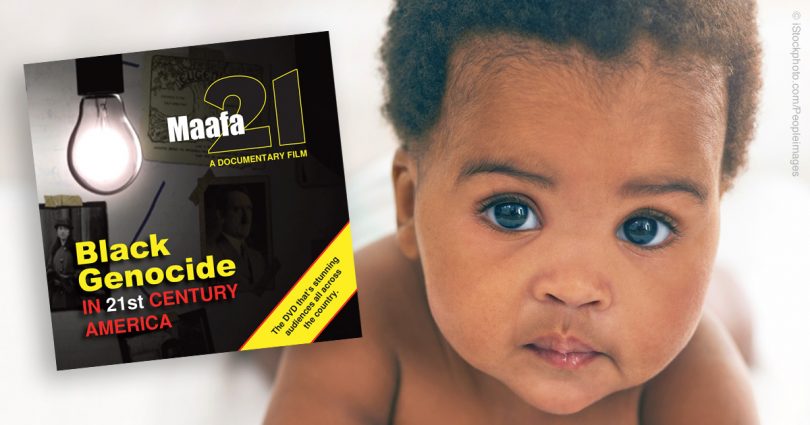 When Maafa 21: Black Genocide in 21st Century America—an explosive exposé chronicling the racist eugenics agenda of the abortion industry in the United States—was released 10 years ago, the Texas-based film’s writer and director, Mark Crutcher, had no idea what to expect.

“I thought maybe we would release about 2,000 DVDs each year, and if we released 10,000 DVDs in total, that the film would be more successful than we could reasonably expect,” he explained. “We ran out of films in eight weeks, and to date we have released over 225,000 with over a million views online. It was shown twice in the Congressional Business Center and thousands of times in churches, civic centers, and convention centers around the country. The impact was far more than anything we could have imagined.”

Crutcher, a longtime pro-life activist and founder and president of Life Dynamics Incorporated, said the film is still changing lives by demonstrating that, though abortionists claim to advocate for women’s rights and reproductive choice, their true motive is racial genocide and ethnic cleansing.

“The latest stats from the Guttmacher Institute and the CDC demonstrate this by acknowledging that black babies are more than three times more likely to be aborted than to be born. In places such as New York City, there are far more black babies aborted than born, and that is in the biggest city in the United States,” he explained. “Part of the reason for this is that Planned Parenthood places the majority of abortion facilities among the black neighborhoods.”

A July 2019 Wall Street Journal article by Jason Riley states: “According to a [New York City] Health Department report released in May, between 2012 and 2016, black mothers terminated 136,426 pregnancies and gave birth to 118,127 babies. By contrast, births far surpassed abortions among whites, Asians, and Hispanics.”

Overall in the United States, African American women make up only 13 percent of the population, but they account for 40 percent of women who have had abortions. Surprisingly, this agenda to wipe out the black race did not begin with Planned Parenthood in the early 1900s, but more than 150 years ago before slavery ended in the US. Crutcher’s documentary chronicles the “elitism, secret agendas, treachery, and corruption at the highest levels of political and corporate America.”

The 144-minute documentary was written and directed by Crutcher after he and two Life Dynamics employees spent three years researching the subject. “Maafa” is Swahili for “a terrible tragedy,” and this word is used to define the time between the slave trade and 21st century. Crutcher and his colleagues chose the title Maafa 21 to indicate that the “Maafa” has not ended.

The film draws a correlation between the end of slavery and a move toward Nazi-like eugenics, forced sterilization, and birth control. It then turns to the rise of the civil rights movement and what he alleges was a corresponding shift toward legalized abortion.

Ironically, the Congressional Black Caucus is staunchly pro-abortion, and in 2012, the Chairman of the CBC, Representative Emanuel Cleaver, was presented with the annual Margaret Sanger Award, Planned Parenthood’s highest “honor” promoting abortion (named after Planned Parenthood’s founder). Cleaver, a Methodist pastor, represents Missouri’s 5th Congressional District, and prior to being elected, used to be pro-life, serving as an advisor for Missouri Citizens for Life. Despite the ramifications of losing more black citizens and, ultimately, their voter base, Cleaver took a stance that is typical among blacks.

“When you look at the polling done—and I have watched it for 35-40 years—the black community votes Democrat over 90 percent of the time, even when they don’t share the values of the candidate,” said Crutcher. “My view is the black community and minority community as a whole are victims of Stockholm syndrome, and even though many are pro-life, they continue to vote Democrat because it is so ingrained in them.”

Part of the dichotomy lies with the Democratic candidates running on platforms to make tax-funded reparations for blacks and other minorities, while at the same time voting in favor of taxpayer-funded abortion laws that help to disproportionally kill the very population they say they are trying to repair. It is impossible to repair a race by aborting them, explained Crutcher.

“This is pandering, and they do this every four years. They have been coming out with reparations to pander to black votes since I was in high school in the 1960s,” he said. “I want to know one time when they actually worked on it and tried to get reparations. They go out and whisper in these black people’s ears, telling them that they are going to get a check as soon as they get in office, but once they get in office, they won’t return phone calls. If they say they are serious about reparations, they are not. It is garbage, and if you believe they are going to follow through, you have drunk the Kool-Aid and fallen for the lie.”

“The fact remains, the most dangerous place for a black child in America is in his mother’s womb,” he said. “And while people like Margaret Sanger and the Rockefellers are gone, we have more eugenics now than there has ever been. People like Bill and Melinda Gates, George Soros, and other hard-core eugenicists are pouring billions into this. Oprah is doing this too, and . . . you see blacks doing it. This is something I never knew before doing this documentary. In my three years of research for Maafa 21, I found that there were blacks during the slavery times—the original Maafa—who got their freedom and went out and owned slaves themselves. One of the largest slave owners was black, and my view is that people like Oprah are like them. They will sell out their own people and do something so patently evil to profit themselves. They are no different than the original slaves, and they did not win in the long run.”

Seeing through the manipulation

Crutcher does acknowledge that some blacks are beginning to wake up to the manipulations. He sees that the Stockholm syndrome is wearing off, and they are beginning to see the lies propagated against them.

“So many of the blacks bought into it, but then we have President Trump. He challenged them by asking them what they had to lose in voting for him,” Crutcher explained. “Many figured they had nothing to lose. He is the only president so far who is really trying to make a change in the abortion laws.”

Despite some states legalizing abortion at any stage of development and permitting infanticide, Crutcher is seeing an awakening among blacks and an understanding of the hidden agenda behind abortion.

“In the beginning, we were seeing just a handful attending the annual March for Life, and now blacks are showing up everywhere,” said Crutcher. “We are seeing events just for African American pro-lifers too, and that is a direct result of them seeing the movie. This has impacted the pro-life message and the black community. In October, we attended the Black Leadership Summit by Turning Point USA [a group that goes on college campuses to promote student freedom, free markets, and limited government]. Normally, they don’t allow pro-life groups at their events. We were originally turned down, but when this Summit came up again, we applied, and they allowed us to go.”

Amid several hundred conservative black leaders, Life Dynamics set up a booth at the Summit promoting Maafa 21. Interestingly, not one attendee asked about the film, as they had all heard about black genocide.

“We asked if they had heard about Maafa 21, and in every case, they may have not known the name, but they knew the original motivation was black genocide. We concluded that the information they shared was from the movie. Even if they didn’t know the name, they recognized the information,” said Crutcher. “Some of the comments were direct quotes from the movie, so I know they had seen it. When we got back to Texas, I called some black leaders and told them about this experience. I asked them if I had asked the same question 10 years ago, how many would have known this information. Without any exception, 100 percent said they would not have known this. The film has had an enormous impact!”

Despite the vast amount of material garnered from their research, no sequel is planned for Maafa 21. Crutcher explained that they shot the film so it would be evergreen and not limited to a specific time. There are many populations that have not seen the film, and Crutcher hopes to impact them.

“We still have lots of showings and have only broken the surface with viewings. It will continue to grow in time,” he said. “One of the things all black leaders told me the day after we had the meeting in October was that I have to remember that the black community is a lot different than the white community. They told me that I need to be patient with the black pro-life approach and not expect the black community to go berserk with this information. It will take time, percolate under the surface, and eventually something will happen to cause everything to burst above the seams. We have seen a lot of evidence of this beginning to happen. At the Black Leadership Summit, I was told they are very aware of the phenomenon that they are the target of legalized abortion. Something will happen that will cause all of this to explode. I am confident.”

Crutcher and his team gathered so much material while researching Maafa 21 that a hefty 90 percent remains yet unpublished. They plan to utilize more of the information in different ways in upcoming months. Crutcher is also starkly aware that, to overturn Roe v. Wade, it is imperative to win over the black community to alter the way they historically vote.

“If we win them to our side, everything changes,” he admitted. “It is time to take all of this to the next level, and we are looking to plan something with the election and other issues. We have been pleasantly astonished with what we have been able to do with it at this point. I never even dreamed that Maafa 21 would be viewed by this many people, so I am very hopeful at what God can accomplish through our work.”

Karen Mahoney is an award-winning Catholic contributing writer and author, as well as a wife, a mother, and a grandmother to 13 children. She has written for a variety of Catholic and secular media over the past 26 years.

This article, and others like it, can be found at clmagazine.org/topic/pro-life-activism/maafa21-ten-years-later.