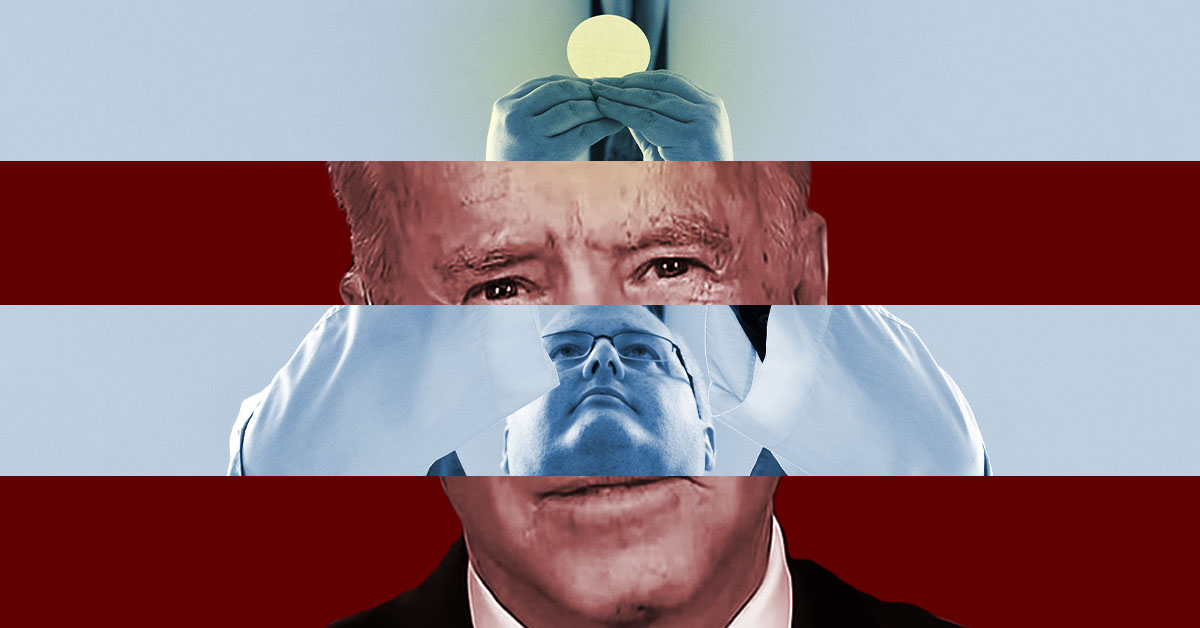 It is hard to believe, but there is at least one Catholic bishop who has put into writing his personal opinions regarding the real presence of Christ in the Eucharist. His name is Bishop Robert McElroy, and his statements are many, but the following stands out as particularly troubling given the sacred nature and identity of the body of Christ:

The Eucharist must never be instrumentalized for a political end, no matter how important. But that is precisely what is being done in the effort to exclude Catholic political leaders who oppose the church’s teaching on abortion and civil law. The Eucharist is being weaponized and deployed as a tool in political warfare. This must not happen.

The Eucharist is not an inanimate thing. Therefore, it could never be instrumentalized by anyone other than those who have denied the sacred nature and identity of it. The body and blood of Christ are very real. So, while Bishop McElroy selectively used the Catechism to support his position, he also ignored this enduring truth taught in that same Catechism: “The Eucharistic presence of Christ begins at the moment of the consecration and endures as long as the Eucharistic species subsist. Christ is present whole and entire in each of the species and whole and entire in each of their parts, in such a way that the breaking of the bread does not divide Christ.”

Many devout bishops and priests do strive to defend and protect the real presence of Christ from sacrilege. That is what leads them to call for the denial of the sacrament to pro-abortion Catholics like President Biden.

They do so precisely because of Christ’s teachings. We see in the Gospel of John that Jesus taught: “I am the living bread which has come down from heaven. Anyone who eats this bread will live forever; and the bread that I shall give is my flesh, for the life of the world.”

The Eucharist is this gift, which is why St. Paul declared that those who flagrantly receive the Sacrament unworthily are literally consuming their own condemnation.

What McElroy has done is create confusion among many Catholics by relegating the body of Christ to an item on a political agenda. This alone shows the level of disregard he apparently has for truth. The Church teaches that Christ is truly present in the Eucharist. By extension, He could never be weaponized. Political issues are often used for such purposes, but Christ Himself is not.

As I stated in a recent press release:

Frankly, the reason good bishops, priests, and deacons strive to protect Christ from sacrilege and obey Canon Law by denying the body of Christ to the Catholic who embraces killing babies is because they love Christ and wish to bring the offending Catholic to His mercy. They wish to make it clear that those who are publicly engaging in manifest grave sins such as abortion must be truly repentant, sorry for their offenses to Christ, and willing to say to Him and to the public that they are truly sorry.

Why McElroy does not understand this is beyond us, but one thing is clear: Defending Christ from sacrilege is NOT a political matter, it is a matter of eternal salvation.

Capuchin priest Fr. Thomas Weinandy recently wrote about this very thing, saying: “Faithful Catholics know that there is an irreconcilable disconnect between what is being held by such Catholic politicians and their receiving Communion. And they see that it’s the dissenting Catholic politician who is politicizing the Eucharist.”

And that, my friends, is what Bishop McElroy does not see as clearly as you and I.

Please join with us in praising God for the defense of the Eucharist that has been so eloquently taught by Archbishop Joseph Naumann, Bishop Thomas Paprocki, retired Archbishop Charles Chaput, Archbishop Salvatore Cordileone, Archbishop Samuel Aquila, and Bishop Thomas Olmsted among others. Further, let us pray for all bishops, including those who, like Bishop McElroy, are called to be shepherds rather than apologists for the errant men and women who call themselves Catholic while spitting on the face of Christ through their support for killing babies.

No matter how much some twist and pervert the truth, these verbal gymnastics will never change it. Jesus Christ is truly present in the Eucharist. That is the truth.