Jesus Christ Assured Us His Presence Is Real

Home . Publications . Jesus Christ Assured Us His Presence Is Real 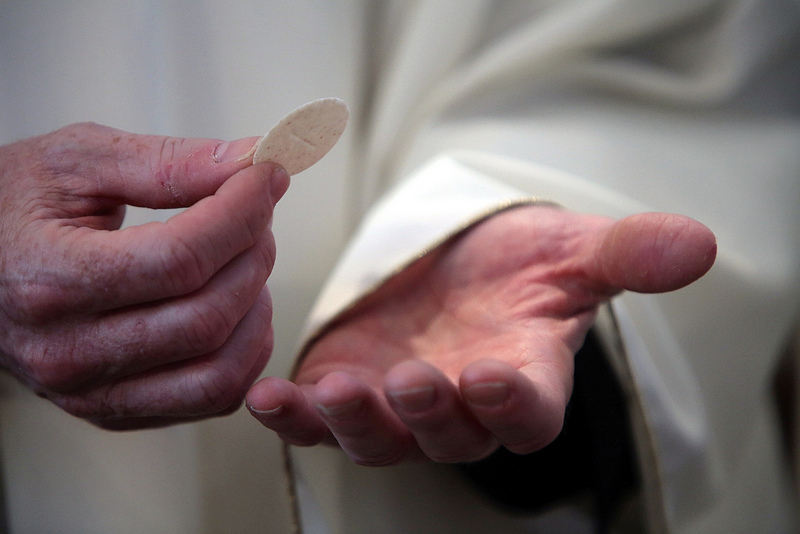 Jesus Christ Assured Us His Presence Is Real

Swimming upstream in the gunk of our age, we understand that it is, at times, challenging to focus on the one gift that exceeds every other: the Holy Eucharist. As a Catholic, I find this sacrament to be a lifeline that protects from the evil of the day.

Christ Himself assured us that His presence is real in the Eucharist. In Matthew 26:26, He told His Apostles, “Take, eat, this is My body.” In John 6:53, He explained that “if you do not eat the flesh of the Son of man and drink his blood, you have no life in you.”

Knowing this and truly believing it, we found it astounding that when, during the last United States Conference of Catholic Bishops meeting, Bishop Joseph Strickland addressed the urgent need to challenge pro-abortion Catholic politicians, his statement was ignored by the bishops in attendance.

How can this be? Doesn’t every Catholic bishop know what we know about the real presence of Christ in the Eucharist? Have they not all felt the urge in their hearts to lay down their very lives in order to protect the body and blood of Christ?

Cardinal Raymond Burke, a recognized canon lawyer and faithful shepherd, has said: “It is clear that Church discipline places an obligation on the minister of Holy Communion to refuse Holy Communion to persons known, by the public, to be in mortal sin. . . . No matter how often a bishop or priest repeats the teaching of the Church regarding procured abortion, if he stands by and does nothing to discipline a Catholic who publicly supports legislation permitting the gravest of injustices and, at the same time, presents himself to receive Holy Communion, then his teachings ring hollow.”

READ >>  Now Is the Time: An Invitation to Conversion

Why hasn’t every single Catholic bishop, not to mention every Catholic priest, acknowledged this fact and acted accordingly?

I know I’m asking a lot of questions, but they deserve answers. And since such queries continue to go unanswered by the majority of American bishops, we see that they stand as harbingers of their failure. Thus, when we hear from Pew Research that only 1/3 of all Catholics in this nation believe that the body and blood of Christ are truly present in the Eucharist, we know why.

Catechizing Catholics is a lost practice among many of those commissioned by Christ to (John 21:17) “feed my sheep.”

So, we look to the bishops who are teaching truth to give us courage and the inspiration to keep fighting for recognition of the real presence of Christ. Bishop James Wall of Gallup, New Mexico, for example, reminded his flock that Pope Benedict warned that often “the Eucharist is devalued into a mere ceremonial gesture.”

Remember St. Paul: “Whoever, therefore, eats the bread or drinks the cup of the Lord in an unworthy manner will be guilty of profaning the body and blood of the Lord.” . . . We would do well to remember, then, that the Eucharist is not simply a nice “sign” or “symbol” of communion with God, but rather truly is communion with God. (In fact, it is so far from being a mere symbol in the modern sense of that term, that Flannery O’Connor once famously said that “if it is just a symbol, to hell with it!”) For the Eucharist is nothing less than the very Body, Blood, Soul, and Divinity of Jesus Christ, and the “source and summit of the Christian life” (Lumen gentium, 11).

Archbishop Charles Chaput teaches: “Over the centuries, men and women have given their lives to honor and defend Christ’s Real Presence in the Eucharist precisely because it’s the foundation of our Catholic identity, and the seal of our unity and shared belief.”

God’s Word became flesh in the womb of the Blessed Virgin Mary. But God continues to be present to us through His Word taking flesh in the form of the Eucharist. We become literally a temple of God when we receive Holy Communion, God dwelling within our bodies. And so yes, we must glorify God with our bodies, by keeping ourselves pure in body as well as in mind and in speech.

We could go on, but the point is that there are not enough teachers like Wall, Chaput, and Cordileone. If there were, there would be no crisis of faith in the Catholic Church today.

And frankly, if there were no Catholics denying the fundamental teachings of the Church, then the Church would have united as one body years ago to provide the scientific evidence, not to mention the Biblical evidence and Catholic teaching, needed to end abortion in our nation.

Jesus Christ Himself assured us that the presence is real!