I Saw the Face of Evil in Her Smile

Home . Publications . I Saw the Face of Evil in Her Smile 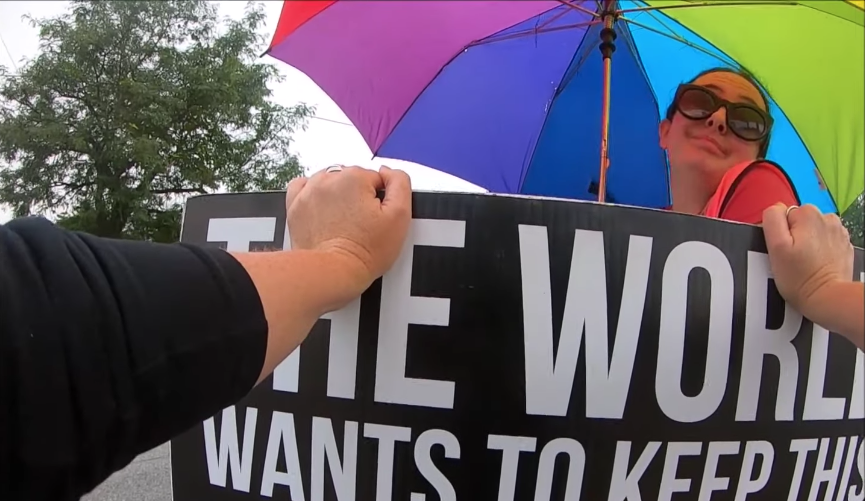 I Saw the Face of Evil in Her Smile

When encountering evil, Ephesians 6:11 says to

“put on the armor of God so that you may be able to stand firm against the tactics of the devil.”

And put on the armor she did. When wickedness approached, she stood firm.

I recently watched a disturbing video of a pro-lifer getting accosted while holding a sign in front of an abortion clinic. Unfortunately, videos showing the violence of some pro-choice people toward those who are praying peacefully are nothing new. But this one was disturbing on a different level. It was disturbing because the video showed a young pro-choice woman—maybe 19 or 20—engage the sign holder in an immaturely antagonistic manner and with such a smug smile on her face that you couldn’t help but see the hand of the devil in the interaction.

The agonizing video goes on for over six minutes, though the encounter must have lasted much longer. All the while, the young woman pushes the sign, leans her whole arm over the sign, puts her arm over the woman’s hand, and even tries to incite others when the pro-lifer attempts to hold the sign firm. “She almost unbalanced me,” the young woman yells across the parking lot, trying to garner attention.

The sign holder attempts to move away, but the girl follows. The sign holder says at one point, “I don’t have to allow you to lean on my body.” To which, the girl responds, “Yes you do. Legally you do.” No, young lady, she doesn’t. Didn’t we learn about this with the #Metoo movement?

At another point, the girl yells, “How dare you shove that into me that hard? You piece of s***.” The pro-lifer had not shoved the sign into her.

It’s a disgusting and disturbing display. And it’s one that makes my heart ache for the current generation of young people. The callous disregard for life that this immature and misguided young woman showed is appalling. When confronted with the image of a dead baby, this young woman could only smile and antagonize the woman holding it.

Parents need to wake up. Is this the world that we want for our children and our children’s children? We need to do better. If we do not educate our children about the sanctity of life, they will grow up to be like this young woman—smiling maniacally in the name of “choice.”

Psalm 37:8 says: “Refrain from anger; abandon wrath; do not be provoked; it brings only harm.”

I am glad that the pro-life woman did not let anger take over in that moment, as nothing good would have come from it. But that does not mean that we should not be angry by what happens to over 3,000 babies each day in this country. We should not direct this anger toward people, but to the evil that is abortion. This righteous anger must then guide us toward action—toward teaching others, toward changing laws, and toward raising generations of people who value every human being as a child of God.

READ >>  Is Murder Right or Wrong?

We can see that the devil is running scared. What will you do to keep him running?