Grief from Which We Don’t Recover; Love That Never Dies

Home . Publications . Grief from Which We Don’t Recover; Love That Never Dies 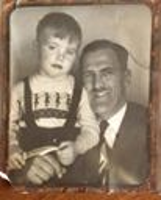 Grief from Which We Don’t Recover; Love That Never Dies

There is such a thing as a grief from which we never truly recover. There are loves that never die. I have experienced both.

It was exactly 50 years ago my father died. He was part of that generation broadcaster Tom Brokaw called the “greatest generation.” They were raised during the Great Depression of 1929-1939. They fought in World War II against the Nazis and Axis forces; they did not do it to be recognized or for fame. They simply did it because it was the right thing to do.

My father was born in 1917, during the Great War. He was not afflicted with a miserly disposition that many people were left with from suffering depravation of the “dirty thirties.” Quite the contrary, my dad was generous to a fault with his money and his time. He was a deeply committed Christian. He loved me from the day he discovered my mother was pregnant.

From my first memories of childhood, his unconditional love, gentle but firm nurture, and manly good nature loomed large over my world and early formation. We were two peas in a pod, and I worshipped him. I shouldn’t have, but I did. Even 50 years after his untimely death, the smell of old books and pipe smoke (rare these days) reminds me of him.

In January of 1970, Dad and I went downhill skiing on a bright and sunny afternoon, just as we had done for many years. The sun reflected off the white snow intensifying the brightness and pleasure to be outdoors in a crisp Canadian winter day. I remember the wind in my hair, breathing the clean cold air, the sound of my skis that sprayed snow with each turn. Everything was perfect. I remember it like it was yesterday. Dad was skiing ahead of me. Suddenly he collapsed face down in the snow. I stopped, quickly ripped off my skis, and ran to turn him over. His eyes clouded then rolled back into his head. My father died in my arms from a massive heart attack that day on a ski slope. The experience is indelibly and forever burned into my memory. He was 52 years of age. I was 16.

That was the grief from which I have never truly recovered, and that is why I remember it like it happened yesterday. I am 66 years old now, and I have thought of him every day since that cold January day in 1970.

READ >>  Then and Now: The Descent of Ethics

My father would not fit into the New Dark Age of the 21st century. Then again, nor do I. He would be horrified to learn that Canada has overthrown its Judeo-Christian roots for nihilism, that acceptance of truth has been replaced by relative truth, versions of truth, truth based upon personal feelings, situations and circumstances.

He would appalled to discover that children are taught all kinds of perversion in public schools—beginning in kindergarten. My father would be stunned to discover that marriage, as it was known for hundreds of years, has been redefined and that divorce rates hover near 50 percent of all marriages, and countless children are being raised in single-parent homes where their father is absent. He believed children need and deserve to be raised by their mother and their father. So do I.

My father loved children. It would have broken his heart completely to learn abortion has become a right and millions of children have been killed before they ever saw the light of day. In Canada, a woman can have an abortion for any reason at all or no reason whatsoever and have as many abortions as she wants, and they are all paid by taxpayers. He would be horrified to learn that Canada legalized euthanasia. He would weep to discover Canada is contemplating expanding euthanasia to the mentally ill and children.

I think he would regret coming back to discover that those things he held most dear, and Canada once embraced—like the sanctity of all human life—is all but gone. We are a pale reflection of the great nation he knew, loved, and served.

Mark Davis Pickup has lived with aggressive multiple sclerosis for over 34 years. Although electric wheelchair dependent, Mark has spoken across the United States and Canada promoting the sanctity, dignity, and equality of all human life. He has addressed politicians and legislative committees (both Canadian and American), university forums, hospital medical staffs, religious and denominational leaders, community groups, and organizations about the critical importance of protecting all human life from conception to natural death. Mark is also a widely published writer on bioethical and Christian issues.  Mark is the recipient of numerous awards including the Monsignor Bill Irwin Award for Ethical Excellence, the William Kurelek Award for fostering respect and appreciation for the dignity of human life (Canada), and a Governor General’s Medal for Community Service.

This article has been reprinted with permission and can be found at humanlifematters.org/2020/01/grief-from-which-dont-recover-love-that.html.