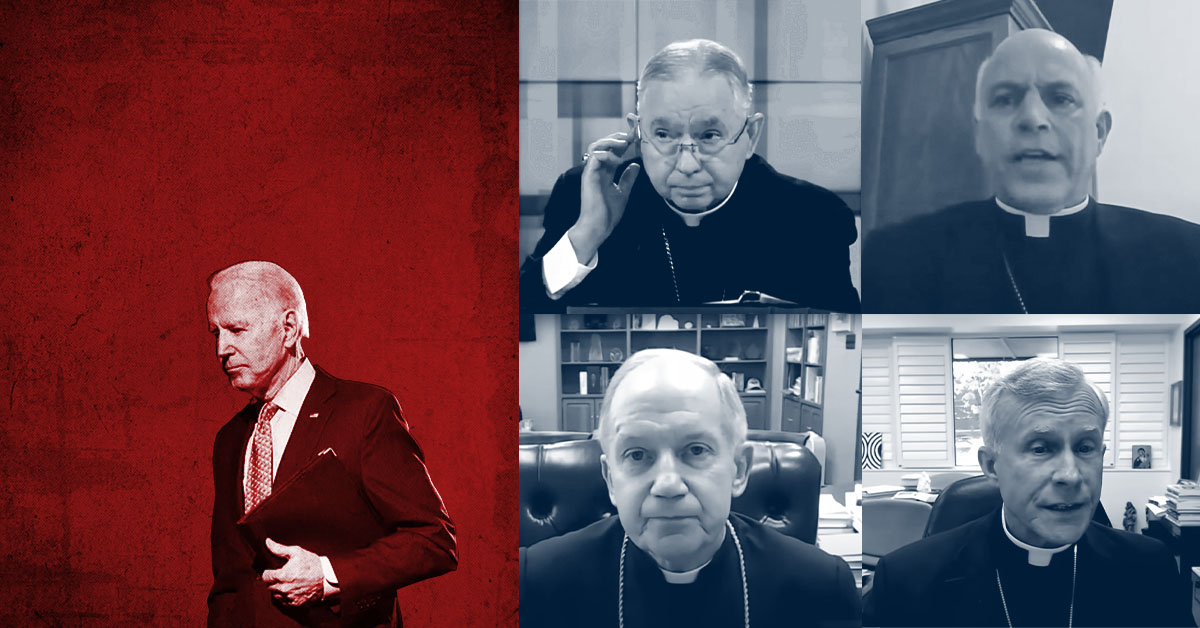 The United States Conference of Catholic Bishops voted this past week in favor of drafting a teaching document on the Eucharist. The vote was 168 to 55 with six abstentions. Many have reported this with a certain amount of positivity, encouraged by a vote that should never have been needed.

The crux of the question before the bishops—and a challenge that apparently still remains—is to decide whether or not Catholic people in public life who support the “abominable crime” of abortion should be denied Holy Communion.

Or to put it another way, it seems the bishops cannot simply say that disrespecting the body of Christ by advocating for and publicly supporting the killing of the innocent by abortion is an abominable act.

Perhaps the bishops have forgotten that the Catholic Church has a body of laws and that Canon 915 reads in part: “Those . . . obstinately persevering in manifest grave sin are not to be admitted to Holy Communion.”

Abortion is a manifest grave sin, and thus advocating for that act publicly should disqualify anyone from receiving the body of Christ. Further, if that person approaches to receive Him, he should automatically be denied.

Why is that fact so difficult for the shepherds of the Catholic Church to understand?

Even Archbishop Salvatore Cordileone, who has written beautifully about the truths of this matter, said at the end of the meeting that he was looking forward “to continuing fruitful dialogue.” Great! But it seems like his excellency was simply bowing to the weakness of his fellow bishops, who in my mind made a political decision on June 18, not a decision inspired by the Holy Spirit.

Just think about the comments of Bishop Mark L. Bartchak of the Diocese of Altoona-Johnstown, Pennsylvania, who wrote days before the meeting that he welcomed the opportunity to negotiate a document that would provide bishops with opportunities for “consultation, modification, or amendments.” The basis for his comments, he told his people, was paragraph #2272 of the Catechism of the Catholic Church, which deals with possible excommunication of those who procure an abortion, not those who, by their actions, advocate for the crime.

If Bartchak took this route to protect the lies of President Joe Biden from the truth of his total disrespect for Christ in the Eucharist, he did that man no favors. Immediately after the close of the bishops’ meeting, Biden dismissed the possibility that the bishops might agree to obeying Canon law and denying him the body of Christ. He stated: “That’s a private matter and I don’t think that’s going to happen.”

And then there’s the matter of the 60 defiant Catholic members of Congress who signed on to a public “statement of principles” in which they state: “We believe the separation of church and state allows for our faith to inform our public duties and best serve our constituents. The Sacrament of Holy Communion is central to the life of practicing Catholics, and the weaponization of the Eucharist to Democratic lawmakers for their support of a woman’s safe and legal access to abortion is contradictory.”

These pro-abortion members of Congress go on to say: “As Catholic Democrats who embrace the vocation and mission of the laity as expressed by the late Pope John Paul II in his Apostolic Exhortation, Christifideles Laici, we believe that the Church is the ‘people of God,’ called to be a moral force in the broadest sense.”

Such deceptive rhetoric is designed to ignore the despicable crime of abortion that kills a human being. But it is also a warning, not simply to the bishops but to the very meaning of Catholic identity.

St. John Paul II taught that the Eucharist is the “‘summit’ of Christian initiation and all apostolic activity, because the sacrament presupposes membership in the communion of the Church. At the same time, it is the ‘source,’ because the sacrament is nourishment for her life and mission.”

Yet, to President Biden and these 60 Catholic politicians, their opinion of the Eucharist is a weapon carved out of their cunning words that will be used to drive a stake directly into the heart of Christ.

Fr. Damien LIN Yuanheng wrote: “Christ is not just another opinion. Christ is Truth itself. To deny truth is like someone who insists on closing his eyes from the sunlight.”

Each of us must stand in that sunlight, defend the innocent from the abominable act of abortion, and defend the Eucharist from those who would assail the body of Christ for their own political advantage. To do less is to surrender to the evil one.