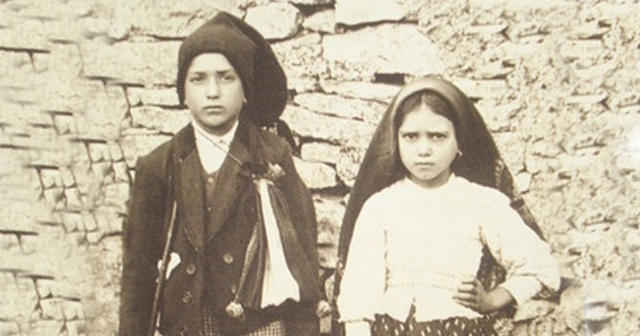 By Susan Ciancio and Catherine Daub

“Why doesn’t Our Blessed Lady show hell to sinners? If they could see it, they would never commit any more sins.” – Jacinta Marto

On May 13, 1917, three Portuguese children who lived near a town called Fatima were blessed with the first of several visions of the mother of God. Mary appeared as a beautiful woman dressed in white and surrounded by light. She appeared to the children on the 13th of each subsequent month through October.

When Mary first appeared, Lucia Santos, age 10, was tending sheep with her cousins, siblings Jacinta and Francisco Marto. Jacinta was just seven years old, and Francisco was nine. What happened to them would change their lives and influence Catholics throughout the world—then and today. Their examples, their words of love and caution, and their steadfast faith reached people of all nations and helped them understand the seriousness of sin and the necessity for prayer.

As Mary spoke with the children, she asked them to learn the Rosary and to pray it every day “to obtain peace for the world and the end of the war [in Portugal].” In addition, Mary told them they should pray for sinners and for the conversion of Russia.

Each month, for the next six months, the children returned to the spot where Mary appeared and talked and prayed with her. She told them secrets about the world, helped them understand the evils of sin, and showed them a vision of hell. This vision affected Jacinta so deeply that she wondered aloud to Lucia why the Blessed Mother didn’t show hell to sinners. “If they could see it,” she said, “they would never commit any more sins.”

READ >>  Electing Who Is Best

The visions and conversations with Mary had a profound impact on all the children. Francisco often prayed before the Blessed Sacrament, preferring to do so alone. He prayed fervently “to console Jesus for the sins of the world.” Not quite two years after the visions, Francisco died of influenza at home.

Jacinta, too, eventually succumbed to the flu and tuberculosis and died in 1920. However, she suffered greatly before her death. She told Lucia that she had a vision after Francisco’s death that Mary asked her if she wanted to be taken to heaven then as well or if she wanted to suffer a while longer on earth for sinners. Jacinta said she chose to stay and suffer. She told Lucia: “Our dear Lord is so sad and Our Lady told us He is already too greatly offended and we must not offend him anymore, but nobody listens and they just go on committing the same sins.” Jacinta felt it was her duty to suffer to save the souls of sinners.

Lucia became a Carmelite nun and lived to see both her cousins beatified. She died in 2005. Jacinta and Francisco were canonized in 2017.

Jacinta and Francisco were young, but they helped build a culture of life that still lives on today. The suffering they offered up and the prayers they said did an immense amount of good for people, even though many may not have been aware of this until after their deaths. We must never discount the power of prayer in building a culture of life. No prayer is ever said in vain, and God hears every single one of them.

When people at first heard the children talk of this glorious lady from heaven, they ostracized them, made fun of them, and even harassed them. But the children never wavered in their desire to tell the truth about Mary and their visions.

How can we use their example to help our children and students see how important it is to be brave and bold as we work to further God’s truth and build a culture of life? Do we spend enough time talking (in an age-appropriate way) about the issues—not just abortion, but the decline of our culture overall—that affect us all? Now is not the time to be lukewarm. Now is the time for holy boldness!

While the children were afraid at first, they grew to have moral courage—the courage to stand up for what they believed and for what is good in the eyes of the Church. Imagine being so young and facing crowds of jeering people who neither believe you nor understand you. It must have been incredibly difficult, yet these three could feel the power of Christ’s and Mary’s love, and they drew strength from this love.

There is no reason why our children and students cannot learn to model this moral courage. Sharing stories of young people who stand up for truth is a great way to inspire young minds and show them that it is very possible for one person to make a difference. Anything is possible when our Blessed Mother is with us!

We rarely face the indignation that these children felt, though we likely all have felt some sort of disdain for our faith and practices. But in our increasingly secular society, where lives are devalued, babies are slaughtered, and the disabled and elderly are hastened to death, we must summon the strength that these children had as we stand up for the most vulnerable among us. Furthermore, we must summon the courage to talk every single day with our children about the value and dignity of the human person.

If you think about it, it’s not that hard. Every day presents opportunities to celebrate the differences in the abilities of our fellow human beings. Every day presents opportunities to share stories of great courage both in current events and throughout history. Simply talking about the events of a child’s day can offer opportunities for them and us to learn to love others better. Most importantly, remind your children daily that they are valuable, important, and capable of greatness. Building a culture of life is, of course, about ending abortion and other threats to human dignity, but that begins for children by learning to love, show mercy, and helping them daily to celebrate life.

Mary asked the children to pray, and so she asks all of us to pray. Pray for sinners; pray for peace in the world; and pray for people to return to a culture where every single person is valued, protected, and loved. This is the life that Mary and Christ want for us.

“I love Our Lord and Our Lady and I never get tired telling them that I love them.” Let us adopt this philosophy in our own lives. We should never tire of telling Christ and His mother that we love them. And the best way to tell them we love them is to show them through our actions as we build a culture of life here on earth.

This article has been reprinted with permission and can be found at cultureoflifestudies.com/clsp-blog-divi/celebrating-sibling-saints-jacinta-and-francisco-marto.