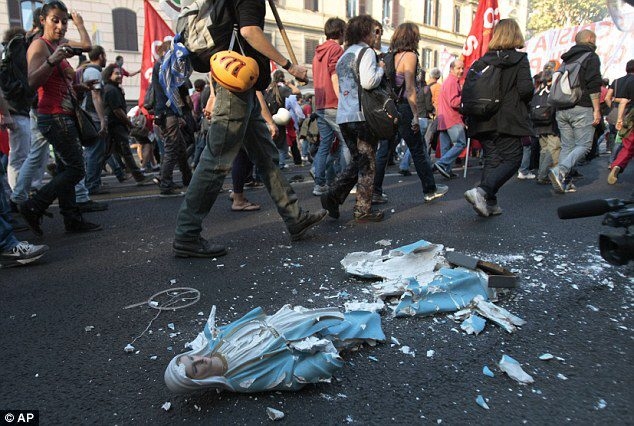 Buescher is self-identified as an “avidly pro-life attorney,” with membership in the conservative Federalist Society. And, like Supreme Court Justice Brett Kavanaugh, who was verbally attacked amid unproven accusations that he sexually assaulted various women, Buescher is a target for the bloodthirsty leftists—especially senators like Kamala Harris (D-CA) and Mazie Hirono (D-HI).

Unlike Kavanaugh, Buescher’s biggest vulnerability appears to be that he is a Catholic, who, among other things, is a member of the Knights of Columbus. The K of C is a fraternal organization founded in 1882 by Father Michael McGivney, a Catholic priest who envisioned a lay organization of Catholic men who would do charitable works, including caring for the families of deceased members.

But, today, membership in that organization appears to be a stumbling block for anti-Catholic bigots in the US Senate.

We cannot make this stuff up. This quote from a report published in the anything-but-pro-life Washington Times makes our point:

“The Knights of Columbus has taken a number of extreme positions,” said Ms. Hirono, Hawaii Democrat, citing the group’s opposition to same-sex marriage. “If confirmed, do you intend to end your membership with this organization to avoid any appearance of bias?”

Ms. Harris asked Mr. Buescher, who became a member 25 years ago as a teenager, “Were you aware that the Knights of Columbus opposed a woman’s right to choose when you joined the organization?”

In other words, Hirono and Harris oppose Buescher because he is Catholic and because he is a member of a Catholic men’s organization, not because of concerns that he might be a weaker than average attorney or may have a questionable record of some sort. The mere fact that he is proud to be Catholic is enough to disqualify Buescher, not only for Hirono and Harris, but for the likes of Senators Cory Booker and Dianne Feinstein as well.

Booker found Buescher’s statements on abortion and LGBTQ rights “deeply troubling.” Feinstein also focused on whether or not Buescher could be objective on abortion, gun rights, and God knows what else!

In other words, if you have specific views on matters of life and death, like whether or not justice should be served, you are in trouble with folks who wear their disdain for God like a badge of honor, especially in hearing rooms where good men can be drilled to death with stupid questions.

Need we say more? Since when has it become fashionable to trample over a person’s character and his record merely because he has faith in God and is proud to say that he does? Something is seriously wrong with America.

“Our country’s sad history of anti-Catholic bigotry contributed to the founding of the Knights of Columbus, and we are proud of the many Catholics who overcame this hurdle to contribute so greatly to our country.”

And yet today that bigotry seems more virulent than ever!

Trump nominee Brian Buescher should be confirmed by a United States Senate that does not hold God in such disdain that its members are blinded to a stellar record held by a talented attorney because he happens to be Catholic!

It is time for faithful Catholics to stand up and defend justice for all, including people of faith. We do NOT live in the Kremlin!