A Reflection on Pope Francis in the USA

Home . Publications . A Reflection on Pope Francis in the USA 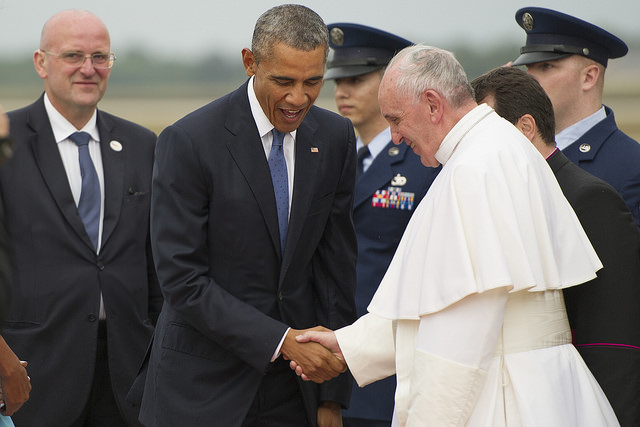 A Reflection on Pope Francis in the USA

Pope Francis gave a historic speech last week to the United States Congress. He discussed at length the need to protect the environment, he spoke eloquently about immigration and the need to care for the poor, and he gave an impassioned plea to end the death penalty. He also mentioned in passing the need to protect life at every stage of development.

For those of us engaged in the defense of preborn children, who fight the good fight for mothers and children and the family, we were disheartened. Pope Francis disappointed us.

Whether in front of our nation’s wretched and corrupt “political class,” the United Nations, or even our bishops, Pope Francis’ opportunities to save lives, to end horror, and to bring moral clarity and show his flock leadership fell flat. He had so many opportunities to bluntly address the staggering hypocrisy of the culture-of-death Catholics who have created and publicly supported the ever-expanding culture of death in America, but he took a pass.

Like many American bishops who cower when given the challenge of confronting these culture-of-death Catholics, Pope Francis avoided the subject. The very Catholics who are responsible for the legislative expansion of the culture of death here in America—many of whom hide in plain sight under the cover of the Catholic Church—were silently averted by this pope who apparently prefers to use subtlety and nuance when it comes to what really matters.

We recall Washington, D.C.’s Cardinal Donald Wuerl who, when asked why he would not deny Jesus Christ in the Eucharist to culture-of-death Catholics, stated that he prefers the pastoral approach. Is this the pope’s cup of tea as well?

We would love to ask Cardinal Wuerl how many culture-of-death Catholic politicians he has converted in his decades as a priest using the “pastoral approach.” We feel certain he could not name one!

Pope Francis is a stark contrast to Saint John Paul II, who was a once in a lifetime gift from God. His writings in the defense of life and the natural law may well position this great saint to be declared a “doctor” of the Catholic Church in years to come. A doctor of the Catholic Church is an official designation that is bestowed by the pope in recognition of the outstanding contribution a person has made to the understanding and interpretation of the sacred scriptures and the development of Christian doctrine.

As Catholics, we must trust the Holy Spirit. Pope Francis is the vicar of Christ here on earth. He is a gentle soul and his focus is clearly on the poor and the environment. The natural law and the truth are simply not a priority for this man. The culture-of-death Catholics who refer to themselves as “liberal Catholics” love him not because he has opened their hearts, but because he gives them a false sense of security. They believe somehow that caring for the poor and the environment gives them continued license to embrace homosexuality, contraception, abortion, and euthanasia without fear, without hesitation, and without shame, causing great scandal and sacrilege without reparation.

The great and mighty spray-tanned Joe Biden is a shining example. Joe Biden is a pillar of the anti-church, a servant of deception who has the blood of 60,000,000 children on his hands, and yet there are very few Catholic bishops on God’s earth that would rebuke him, as most are far too politically correct to defend Christ from sacrilege. Biden is a modern day Judas empowered by the cowardice of shepherds undeserving of their heritage.

READ >>  Celebrate a Miracle or Two!

Today we live in times as perilous as those described by Pope Pius XI as exhibiting “unchained powers of darkness.” Our response to this evil is important. We are not to put our faith in men, including the pope. He is a good man who cares for all of humanity, but he is not the man for the fight at hand. I know not the will of God. Perhaps the pope realizes the hour we are in and is trying to convert and save as many people as possible. We can only hope.

What I do know is that we must trust in Christ and never relent from living and telling the truth. Lives depend on it. We must also pray that the Lord in His mercy will raise men of courage who will lead His flock now and in the future without fear and without hesitation.

A once in a lifetime chance to save lives and bring clarity was lost during the papal visits, but our final victory is in Christ, not men. And we must never forget that.

Hugh R. Brown III is Judie Brown’s son. Hugh is the father of five, president of AKA Printing and Mailing, one of the founders of St. Michael the Archangel High School, and a member of the board of directors of American Life League.